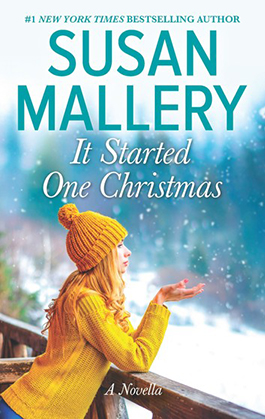 Susan Mallery’s heartwarming charmer proves that true love is the greatest Christmas gift of all!

One crisp December night, Keira Carlesso takes in yet another stray—this time, a man. Dalton is a brilliant scientist with no home for the holidays. As Christmas works its magic, two strangers become friends, then best friends, then something much, much more…

Susan Mallery’s heartwarming charmer proves that true love is the greatest Christmas gift of all!

"It Started One Christmas is very pleasant and perfect for a quick holidays read."

"I think our lab guy just fainted," April Herskovic murmured as she put two beakers back in the drawer.

Keira Carlesso spun around to check out the guy sitting at the desk at the front of the lab. Okay, not sitting—he was kind of slumped, but still. As she watched, he shifted to a more upright position. Thank goodness—they only had a couple more items on their list and then they were done with their make-up lab. The last thing she wanted was to have to fail the assignment because some lab tech passed out.

"He's moving. Let's get this done and then we are out of here."

As she spoke, she realized she wasn't being the least bit compassionate. What if the guy was really sick? What if he was all alone in the world with no one to take care of him? What if—

She groaned. No. No! She would not be distracted. It was humiliating enough that she and April had to make up the lab in the first place to get this required course out of the way, but they did and they were and it was nearly Christmas and honestly, she just wanted to get done and get home.

They both looked around the lab. Keira spotted it first.

"It's right there." She grabbed her pen and paper and raced over to write down the serial number to prove that yes, she'd seen it, touched it, cuddled it and knew what it was. On her way back, she passed by the front desk. The guy there, all pale and sweaty, moaned.

Uh oh, she thought, returning to their station.

"Done," she said, waving the paper. "We just need it signed off."

April glanced doubtfully at the lab guy. "I don't want him touching my pen. Do you have hand sanitizer?"

Keira pulled out the pina colada scented gel she always carried because hey, it was college and the dorms were nothing if not germ incubators. Plus, college age guys were fairly disgusting when it came to hygiene. She shuddered. Thank goodness she'd been smart enough to request a female-only floor. She did not want to share a bathroom with a bunch of guys.

She and April put away the rest of the supplies, then walked to get their lab report signed as proof that they had completed the assignment. As it really was the very last day of make-ups, there had only been a handful of students who had shown up and the rest of them had already left. She and April were the last students standing, so to speak.

"Finished?" the guy asked, his voice low and husky. Keira noticed his white lab coat had a name badge that read Dalton.

April handed over the paper with both their names on it. He glanced at the sheet.

"You missed the first lab of the quarter?" Dalton asked. "How did you do that?"

April and Keira exchanged a look of frustration. Everyone always asked the same question. It was so embarrassing.

"We didn't give ourselves enough time to get to the lab," Keira said with a sigh. "And then we got lost. We were twelve minutes late and our lab assistant had already locked the door."

"I have better things to do with my time." He pulled a pen out of his white jacket pocket and signed their paperwork. "You are done for the quarter, ladies. At least with your science lab. Have a good holiday."

"You, too," April said as she headed to the door.

Keira hesitated. She couldn't help noticing the sweat on Dalton's forehead and the pallor to his skin. He didn't look well.

"Are you feeling all right?" she asked.

April Paused, one foot in the hallway. "Keira, come on. I have a plane to catch."

April lived in eastern Washington and was flying home for Christmas break. Keira had a very short drive to her house and she would be taking a cab.

"You go ahead," Keira told her. "I want to make sure Dalton gets to his place okay." She had to do something to make up for her selfish thoughts from before.

April nodded. "Have a good break. I'll text you."

Dalton put his arms on the desk and his head on his arms. "Just go. I'll be fine."

"You look awful. Come on. I'll help you to your car or apartment or whatever. You need to get into bed."

She half expected an awful leer at her last remark—she'd encountered plenty since starting at the university. But Dalton didn't stir.

"I'm aware of that, however I am perfectly capable of taking care of myself."

"All evidence to the contrary? Yeah, I'm not leaving, so you might as well give in. Just as an FYI, I'm really bossy and stubborn. You can ask anyone, so surrender to the inevitable. It will be easier, trust me."

For a long moment Dalton simply stayed where he was. Keira had time to notice his too-long hair was a pretty shade of dark brown before worrying he'd passed out. Finally he raised his head, pushed up his glasses and sighed.

"Yes, I'm sick, but I will recover. The human body has amazing recuperative powers, mine more so than most. I appreciate your concern but it's unnecessary. Have a good holiday. You are free to go."

"Uh huh, so what part of stubborn wasn't clear?"

She expected him to shout at her or something. What she didn't expect was him to blush. He was so pale that the sudden flush of color contrasted significantly with his clammy skin.

"Nope, I'm curious." She perched on the corner of the desk. "What's the real story? I have all the time in the world."

She smiled, determined to wait him out.

"My apartment is rented for the holidays," he began. "To the visiting family of one of my professors."

He cleared his throat. "I was supposed to be going to Aspen for the holidays, with my girlfriend."

"I hear Aspen is lovely this time of year."

He returned his head to his arms. "Yes, that's what I hear, too."

"I take it you're not going to Aspen?"

"Did you do something dump worthy?"

He raised his head again. The color was gone and he looked close to passing out. "I didn't have to. She's beautiful. I mean startlingly beautiful. I never had a chance with her."

"But she was your girlfriend."

"For two weeks." The head dropped again. "It's my failing. I'm incredibly smart. Seriously, I'm probably the smartest guy you've ever met. I started college when I was 14. I've already been to medical school and now I'm getting a Ph D. But when it comes to women, I'm an idiot."

"You mean when it comes to beautiful women," she teased. "You have a thing for them. It's cute."

"So you have no home, no girlfriend and you can't go to Aspen until you feel better."

"I can't go at all. She stole my ticket and I think the ski clothes I bought."

"She sounds amazing. I wish I'd met her."

"She wasn't amazing. She was just…"

She considered the situation. "Where were you planning to spend the holidays?"

"I thought you were smart."

"I am, but I'm also poor. It's not as great a combination as you'd think."

Keira swung her backpack over her shoulder. "Come on, Dalton. Get your stuff."

"Yes, then I'm going to take you home with me. We have a spare room. You can recover there. No one should live in their car over Christmas."

"Fine. Then over Hanukkah."

He looked at her, his gaze out of focus. "I'm not Jewish, but I like what you said. You're very accepting."

"For me, it's the spirit of the season, not the religion. But then what do I know? I'm eighteen years old." She frowned. "How old are you?"

"I'm going into research. I want to cure cancer."

She held in a laugh. "Of course you do."

His blurry eyes narrowed. "Did I mention my intelligence?"

"More than once. You're going to need a new topic of conversation. My family is going to have expectations."

He winced. "You have a family. Of course. I can't impose."

"Not to worry. They're used to me dragging home strays." Dalton would be the first human stray, but she doubted anyone would be surprised.

"I live with my sister and her husband and their kids. Frick and Frack are two and four years old."

"They named their children Frick and Frack?"

She laughed and helped him to his feet. "No. I just wanted to know if you were really listening or if all your energy was taken up in being so very, very smart."

"Book smart," he told her, staggering only a little. "Not life smart. Hence the beautiful girlfriend who abandoned me."

"Hence. Have you thought about dating someone more normal? It might work out better."

"I have tried but it's not the same. There's something about a beautiful woman."

"For someone as smart as you claim to be, you're kind of an idiot."