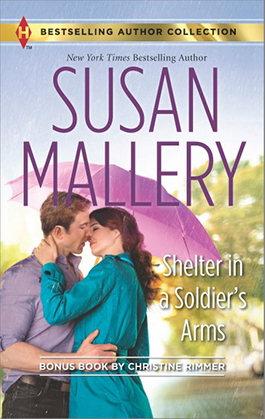 Ashley is determined to make her own happiness without a man, no matter how tempting that man may be...

When Jeff Ritter offered Ashley Churchill shelter, the struggling single mom longed to lean on his broad shoulders. And although she accepted a job as his housekeeper, Ashley was determined to make her own happiness, without the heartbreak of loving a man. No matter how tempting that man was…

It was Jeff's nature to protect, but his heart was off-limits--even to the woman and child he came home to each night. For life had made Jeff a hardened soldier, not a man to love. And despite the hope he saw shining in Ashley's eyes, Jeff didn't dare dream she could truly be his…

"This one was really good, with a sweet four year old girl Maggie and her single financially struggling mom Ashley and a hardened ex-soldier Jeff... I loved every moment of the book it was sweet and delightful. Jeff doesn't think he is warm, fuzzy and loving but Maggie and Ashley get to him."

Jeffrey Ritter sensed it even before he spotted the flashing light on the security console mounted in his car. At five o'clock in the morning the offices of Ritter/Rankin Security should have been locked down and empty. According to the red flashing light, the building was neither.

Jeff touched several buttons on the console to confirm the information. The front and rear doors were locked, but inner doors were open. Lights were on as well, he noted as he drove into the parking lot and headed for a spot to the left of the double glass doors—glass that was deceptively clear but could in fact withstand severe artillery fire and a small bomb blast.

Trouble, he thought again as he put the car into Park and turned off the engine. He popped the trunk of his black BMW 740i and stepped out onto the damp pavement. Although it wasn't raining, the air was heavy and wet, as if the Seattle skies were about to do their thing at any moment.

Jeff circled the vehicle and removed his personal firearm, which he checked and slipped into his specially designed holster. Next came the black stunner, designed to immobilize an attacker without permanent injury. He punched buttons on his beeper, setting it to standby so that a single touch would alert his partner and the authorities. He didn't usually get the latter involved in his operations, but his office was in downtown Seattle. The local police wouldn't appreciate a predawn shoot-out, and they would absolutely expect an explanation.

He turned his attention to the quiet building. Nothing looked out of place. But in his experience that was common. Danger rarely announced itself with a neon sign.

Jeff walked quickly and quietly, moving around the building to a side entrance without a lock. Only a small keypad allowed access. He tapped in the code and waited for the door to unlock. If someone was waiting in the small alcove, the door wouldn't open. There was a slight snick as the locking mechanism released, and he entered the protective space tucked along the main corridor.

He was surrounded on three sides by glass coated to be a two-way mirror. Dropping into a crouch, he surveyed the length of the corridor. Nothing. From the corner of his eye he caught a flicker of movement in the east hallway. It was gone before he could register who or what it was. Damn.

Still crouching, Jeff pushed the concealed button to let himself out into the corridor. He hurried in the direction of the movement, keeping low, running soundlessly. As he rounded the corner, he reached for both the gun and the stunner—only to slam to a halt, as immobilized as if he'd just taken a jolt from his own weapon.

Breath left his lungs. Involuntary impulses forced him to his feet even as he slipped the weapons out of sight. He didn't remember making a sound, yet he must have because the intruder turned and looked at him.

"You hafta be quiet 'cause Mommy's sleeping."

In less than a second he'd scanned the immediate area and absorbed all that he saw. No dangerous intruders, at least not in the traditional sense. Which was unfortunate. Jeff Ritter knew what to do when facing an insurrection, a terrorist hit squad or even a stubborn client. But he had absolutely no experience with children—especially little girls with big blue eyes.

She was small, barely coming to midthigh on him. Dark, shiny curls caught the overhead light. She wore pink kitten-motif pajamas and fluffy, cotton-candy-colored slippers. A stuffed white cat filled her arms.

He blinked, half wondering if she was an illusion. But she remained stubbornly real. As did the woman on the floor beside her.

Jeff took in the cart of cleaning supplies and the woman's casual, worn clothes. Grown-ups he could handle, and he quickly cataloged her flushed face, closed eyes and the trace of sweat on her forehead. Even from several feet away he could sense her fever, brought on by illness. She'd probably sat down to rest and had slipped into semi-consciousness.

"Mommy works hard," the little girl told him. "She's real tired. I woke up a while ago and I was gonna talk to her 'bout why she was sleeping on the floor, but then I thought I'd be real quiet and let her sleep."

Chubby cheeks tilted up as the young child smiled at him, as if expecting praise for her decision. Instead Jeff turned his pager from emergency stand-by to regular, then flicked on the safety on his gun and switched off the stunner. Then he crouched next to the woman.

He was speaking to the adult, but the child answered instead.

"I'm Maggie. Do you work here? It's nice. One of the big rooms is my favorite. It's got really, really big windows and you can see forever, clear up to the sky. Sometimes when I wakes up, I count the stars. I can count to a hundred and sometimes I can count higher. Wanna hear?"

Jeff ignored the ongoing chatter. Instead he reached for the woman's forehead and at the same time he touched the inside of her wrist to check her pulse. Her heart rate was steady and strong, but she definitely had a fever. He reached to lift an eyelid to examine her pupil reaction when she awakened. Her eyes fluttered open and she stared at him, her expression telling him he was about as welcome as the plague.

A man! Ashley Churchill's first thought was that Damian had come back to haunt her. Her second was that while the cold-looking man in front of her might be second cousin to the devil, he wasn't her ex-husband.

Her head felt as if it weighed three tons, and she couldn't seem to focus on anything but gray eyes and a face completely devoid of emotion. Then she blinked and brain cells began firing, albeit slowly. She was sitting in a hallway that looked vaguely familiar. Ritter/Rankin Security, she thought hazily. She was working, or at least she was supposed to be.

"I was so tired," she murmured, trying to sound more coherent than she felt. "I sat down to rest. I guess I fell asleep." She blinked again, then wished she hadn't as she recognized the man crouched in front of her. He'd passed her in the hall when she first interviewed for the job. The office manager had identified him as Jeffrey Ritter, partner, professional security expert extraordinaire, ex-soldier.